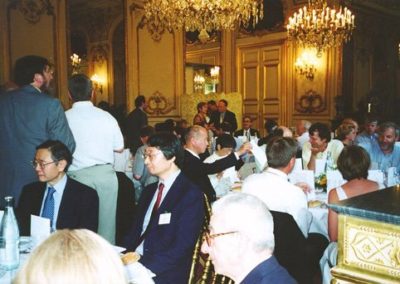 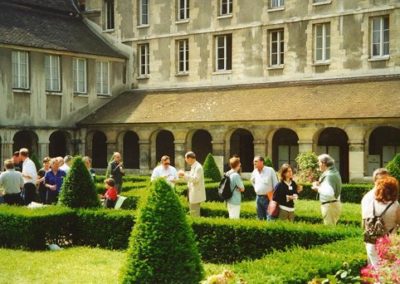 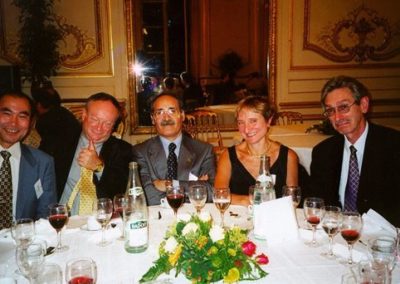 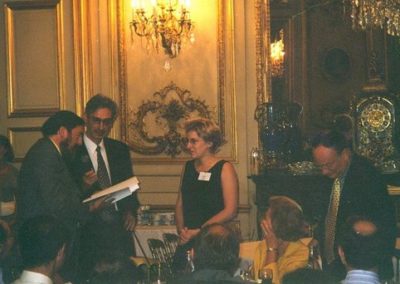 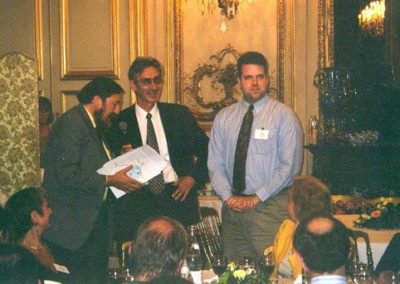 This conference was the sixth in the series of European Symposiums on different aspects of calcium signaling which is being organized under the auspice of the European Calcium Society (ECS). It was excellently organized by Françoise Russo-Marie (Institut Cochin de Genetique Moleculaire, INSERM, Paris) and supported mainly by a grant from the EC. Over 250 participants from Europe, North America and Japan discussed various aspects of intra- and extracellular calcium signaling during 2 and a half days organized into seven different symposia and 2 poster sessions with a total of 112 posters.

Participants in this symposium illustrated and debated the complexity involved in the signaling events regulated by calcium. A big effort was made by the organizers to allow participation of people from Eastern Europe and integrate scientists early in their career. Hence, the focus of the discussions also included several novel proteins.

Although there were no direct reports from clinical trials, several concepts were presented that could potentially be targeted by drugs to modulate this very important signaling pathway. Talking about calcium signaling, one usually thinks of this ion in the context of a second messenger.

However, the symposium was not limited to this second messenger role, since a recurrent theme was the control of physiological properties by extracellular calcium and calcium-bound proteins. In addition, the use of technical advances in imaging with differently colored GFP proteins allowed spectacular novel insights into associated signaling events.

Generation of an intracellular calcium signal

The meeting started with a keynote lecture given by Tobias Meyer (Stanford University, Stanford, USA) who addressed the two main questions of how signaling networks work on the molecular level and how many basic types of signaling mechanisms exist. The answers to these questions will be essential for drug target identification and consequently novel drug discovery. He discussed two types of molecular signaling steps namely the calcium and diacylglycerol mediated activation of protein kinase C and the Ca2+/calmodulin mediated activation of CaMKII.

In both cases, constructs of minimal protein domains coupled to GFP variants allowed the separation of different signals and identified calcium as a key signal for translocation of the proteins to specific compartments. Peter Lipp (Babraham Institute, Cambridge, UK) discussed the elementary principles of cellular calcium signals. Whereas calcium waves are used to coordinate and propagate signals, he identified and distinguished so called sparks as opening of a group of calcium channels and quarks as openings of single channels. However, the significance of this "noise" activity is not yet fully understood.

Interpretation of the calcium signal

In a first series of talks, the role of calcium signals to regulate transcriptional events was discussed. Richard Lewis (Stanford University, Stanford, USA) summarized the events occuring in T cells upon antigen binding which triggers IP3 induced calcium release leading to the activation of the transcription factor NF-AT. Interestingly, blockade of mitochondral Ca2+ uptake can inhibit the nuclear translocation of NF-AT, suggesting a role for mitochondria in the control of gene activation in T cells. Jose Naranjo (Centro Nacional de Biotecnologia, Madrid, Spain) described the isolation and characterization of DREAM, which is a transcriptional repressor regulated by Ca2+. This provides one of the few examples where a calcium signal directly relates to gene transcription. Rosario Rizzuto (University of Padova, Padova, Italy) presented his very nice work done on mitochondrial diseases.

He demonstrated that for partial deficiencies of the respiratory chain there is derangement of mitochondrial Ca2+ handling. Specific drugs like CGP37157 acting on mitochondrial calcium handling, can restore the defective ATP production. Activation of T-cells via Ca2+-signalling was also investigated by Andreas Guse (University of Hamburg, Hamburg, Germany) who showed evidence for the presence of functional ryanodine receptors in T-cells. Furthermore, the cyclic ADP-ribose/ Ca2+-signalling pathway seems to be required for T cell activation, opening the possibility that this pathway could be targeted by novel immunosuppressive compounds, as exemplified by 7-deaza-8-Br-cADPR, a specific antagonist. Traditionally, two specific subgroups of calcium-binding proteins are getting particular attention in this series of Symposia, namely the annexins and the S100 proteins.

Annexins are a family of proteins capable of binding calcium and phopholipids at the same time. Currently, 10 family members are known in mammals. Jacob Rand (Mount Sinai School of Medicine, New York, USA) discussed the specific association of annexins with disorders in phospholipid-dependent coagulation reactions. Increased expression of Annexin II was demonstrated to be associated with excessive fibrinolysis in a subset of patients with acute promyelocytic leukemia. On the other hand, Annexin V (the protein used to specifically detect an apoptotic response) is deficient in patients with the antiphospholipid syndrome and may contribute to pregnancy loss.

Fascinating experiments were presented by Ursula Rescher (University of Münster, Münster, Germany) concerning annexin I. It was found that annexin I exerts anti-inflammatory effects in different experimental settings. This activity is mediated through specific peptide fragments from the unique N-terminal region. In their most recent work, they now present evidence that these active peptides bind to the N-formylpeptide receptor (FPR) thereby stimulating F-actin accumulation and upregulating expression of the acute phase protein fibrinogen.

S100 proteins are a family of small calcium-binding proteins consisting now of 18 different members. In this Symposium, Eugene Lukanidin (Institute of Molecular Cancer Biology, Copenhagen, Denmark) discussed the role of S100A4 in the induction of the metastatic phenotype in breast cancer. It is known that in transgenic mice overexpressing S100A4, formation of metastasis is stimulated. Previous work suggested that this activity is brought about through regulation of cell motility via control of myosin assembly/disassembly.

New work from this group now suggests that S100A4 might also have an extracellular role acting as potent angiogenic factor. This protein might therefore serve as a novel drug target for an anti-angiogenic therapy.

However, the molecular mechanisms underlying this observation are not yet clear. David Stern (Columbia University, New York, USA) introduced RAGE, the receptor for advanced glycation endproducts, as a potential receptor for S100 proteins and their extracellular actions. RAGE is a receptor bound by AGEs, S100A12 and S100B, amphoterin, and beta-sheet fibrils which stimulates multiple signal transduction pathways. Blockade of RAGE by means of e.g. soluble RAGE is capable of suppressing accelerated atherosclerosis in ApoE null mice, and decrease growth and metastases of glioma cells. Hence, this molecule might be a progression factor in a spectrum of chronic disorders.

Calcium as a first messenger

Finally, the role of calcium-binding proteins in the extracellular space was addressed by various speakers. Ed Brown (Brigham and Women´s Hospital and Harvard Medical School, Boston, USA) discussed disorders of extracellular calcium sensing due to abnormalities in the G protein-coupled Ca2+-sensingreceptor.

The regulation of integrin activity by extracelluar as well as intracellular calcium was reviewed by Nancy Hogg (Imperial Cancer Research Fund, London, UK) and in the last regular talk Penny Handford (University of Oxford, Oxford, UK) addressed the molecular basis of the Marfan Syndrome, a connective tissue disease caused by defects in the calcium-binding protein fibrillin-1.

In contrast to previous meetings of this series, this conference provided a broad perspective on different aspects of calcium signaling. Most importantly, clear links between calcium regulated pathways and a spectrum of important diseases have been established and certainly will have to be a prominent focus of future symposia on calcium binding proteins. Certainly, we are already looking forward to the next meeting in this series, which will be held two years from now in Brussels, Belgium.

We use cookies on our website to give you the most relevant experience by remembering your preferences and repeat visits. By clicking “Accept All”, you consent to the use of ALL the cookies. However, you may visit "Cookie Settings" to provide a controlled consent.
Cookie SettingsAccept All
Manage consent

This website uses cookies to improve your experience while you navigate through the website. Out of these, the cookies that are categorized as necessary are stored on your browser as they are essential for the working of basic functionalities of the website. We also use third-party cookies that help us analyze and understand how you use this website. These cookies will be stored in your browser only with your consent. You also have the option to opt-out of these cookies. But opting out of some of these cookies may affect your browsing experience.
Necessary Always Enabled
Necessary cookies are absolutely essential for the website to function properly. These cookies ensure basic functionalities and security features of the website, anonymously.
Functional
Functional cookies help to perform certain functionalities like sharing the content of the website on social media platforms, collect feedbacks, and other third-party features.
Performance
Performance cookies are used to understand and analyze the key performance indexes of the website which helps in delivering a better user experience for the visitors.
Analytics
Analytical cookies are used to understand how visitors interact with the website. These cookies help provide information on metrics the number of visitors, bounce rate, traffic source, etc.
Advertisement
Advertisement cookies are used to provide visitors with relevant ads and marketing campaigns. These cookies track visitors across websites and collect information to provide customized ads.
Others
Other uncategorized cookies are those that are being analyzed and have not been classified into a category as yet.
SAVE & ACCEPT
Powered by